Initial reports of the Workgroups 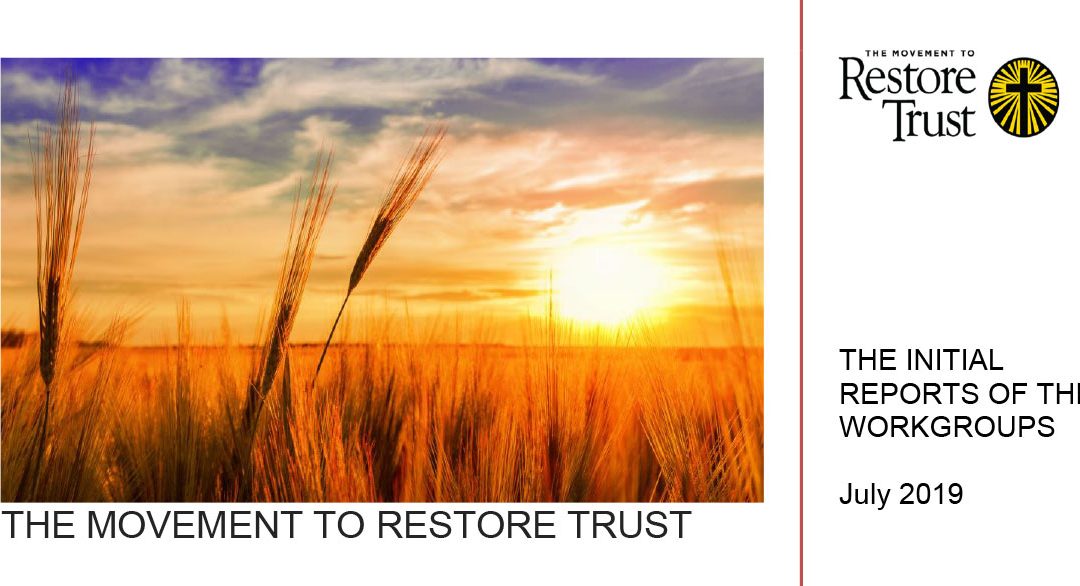 We are pleased to submit The Initial Reports of the Movement to Restore Trust Working Groups which is guiding the work of our group of independent, concerned and committed Catholics to address the Diocese of Buffalo’s handling of sex abuse cases involving clergy, seek justice for survivors of sexual abuse and help the Church of Buffalo look forward, implement meaningful reforms, and restore the faithful’s trust and confidence.

The MRT was formed in October 2018 and in early December created six working groups to address specific areas of inquiry. Those groups met from December 2018 through March 2019 to develop this initial set of reports. They consulted subject matter experts, studied foundational Catholic documents, and looked at best practices from across the United States. Some workgroups consulted Canon lawyers as part of their work.

These reports represent the best thinking of the approximately 150 people who participated in the work groups. This Initial Report includes an Executive Summary prepared by the Organizing Committee as a way of framing the process, findings and recommendations of the work groups for Bishop Richard Malone. It also includes a summary of the recommendations by work group, again prepared by the Organizing Committee to begin our discussions with the Diocese of Buffalo.

The full reports need to be set in the context of what we are doing with the MRT.

We continue to pray for the intercession of the Holy Spirit in guiding this important work for the victims of sexual abuse and the Church of Buffalo.

Movement to Restore Trust, June 23, 2022 The MRT has compiled and submitted a SYNOD report to the United States Conference of Catholic Bishops. A basic question prompted and guided us: How does this journeying together allow the Church to proclaim the Gospel in...

Pilots families begin in JanuaryWestern New York Catholic, December 2, 2021After a year in the consultative process, the Diocese of Buffalo’s Families of Parishes are now finalized. A total of 36 families will be formed by the current 161 parishes in the diocese....

The Appointment of New Bishop

Are You Tech Savvie? September 3, 2020 Our Temporary Administrator for the Diocese, Bishop Ed Scharfenberger is working with Leadership Roundtable and a group of volunteers to hold Zoom conversations with parishioners from all across our Diocese during the weeks of...